Ugh….even poor Ruby was feeling the affects of the phone-attached-humans!

We have become a little disconnected lately. Not too surprising with a rambunctious toddler in our midst, both of us trying to work, house projects, the list goes on and we all have one. I tried to think about things we could do to reconnect. The typical “one date night a week” idea has just never stuck so that idea was out. Then it hit me that one of our biggest problems is how much time we zone out on our phones. For me it’s Facebook and googling the heck out of everything and for Ryan it’s forums, researching hobbies, and Instagram. So with a little convincing we both decided to disconnect from those things for a week. No Instagram, Facebook, Google or anything involving the internet for that matter. The only exceptions were work-related things and responding to any messages someone might send us.

Day 1: Holy moly. I had NO idea how many times a day I instinctively picked up my phone and checked my FB news feed. I had to catch myself probably 25 times today. I had to be so conscious and stop myself from reaching for my phone periodically. It sort a felt like a craving that I was trying not to give in to. So weird. Going on my phone is the last AND the first thing I do everyday. But I did NOT go on FB once the entire day. We went to bed tonight and I started a book! Ryan read some of the magazines in his growing pile.

Day 2: Ryan cheated today. The rule was if anyone messages you on social media you can respond so that we aren’t being rude but NO browsing on either Instagram of FB. Ryan’s biggest issue was the internet and Instagram so when he was tagged in a photo on Instagram he went to view it and the temptation was too great; he “started to swipe” he guiltily admitted. I have maybe gone onto a website or two to research something briefly but I’m pretty impressed I have NOT gone on Facebook once. 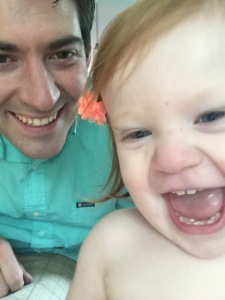 Taken BEFORE the no-phone week 😉

Day 3: It was interesting tonight when Ryan got home. He was playing with Eleanor and being so attentive. Then when she sort of wandered to the other side of the room and started to entertain herself, I watched him squirm for a second because that is when his phone would have normally appeared. But he resisted. Eleanor came back over to him and they continued playing. I just thought to myself “this is what it’s all about, this is why we’re doing this.” Not only for ourselves of course but for our family, for Eleanor. We don’t ever intend to delete any accounts or disconnect completely. Facebook to me is too valuable when it comes to staying in touch with family and close friends or being able to see big moments in their lives and watch their families grow. But we do intend to extremely limit our “Plugged-in” time and focus more on us.

Day 4-6 went off without a hitch! I think I’m getting used to the freeing feeling of not being tied to something …

Final day: I was actually not looking forward to ending this week. Looking back at the week I felt more relaxed, less scatter-brained and more connected with Ryan. With social media there is this pressure to keep up with your feeds so you don’t miss anything but in doing so you are missing out on so much real life right in front of you.

One of the first blogs I read when I was reunited with the internet was interestingly enough about a similar topic but in relation to mothering. (I sadly have not been able to find that blog post again to give them credit!) The basic gist of the post was about how mothers today are so self-conscious and questioning every little parenting move they make because of the overwhelming ease of researching as well as the epidemic of comparing and judging. The funny thing is mothers have never been so connected and so well-rounded yet they don’t even know it or they question it based on making comparisons with so many other moms. Think about being a mother before Google and parenting books. You simply asked your mom for advice and maybe friends and family if you wanted to pick up the phone and call them with each question. The internet is saturated with “do this” “don’t do that” “you shouldn’t cosleep” “cosleeping is wonderful” yadda yadda yadda.

Anyway, what I basically took from this blog as well as this last week is that I’m doing the best I can and I’m a damn good mom. I will listen to others advice but I will only take it if it will truly be best for me and my family. I will also limit screen time with any media and connect more with my family without any screens. I highly recommend it.

Update 8/13/15: Well it has certainly helped that the second I take out my phone Eleanor MUST have it. I literally can not even have my phone anywhere nearby without it inciting a full-blown tantrum if she can’t play with it. It stays hidden on the counter while we spend time with Eleanor. So I have really kept my reduced phone use promise to myself. Ryan on the other hand…might need a little more convincing, maybe in the form of another unplugged week?!? 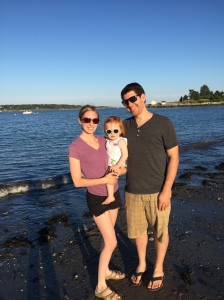 *THIS* is what it’s all about.